Rwanda is a small land locked country in central Africa. It is bordered by the much larger countries of Uganda, Tanzania, Democratic Republic of Congo and Burundi to the South. Rwanda is the most populated country in the whole of Africa and boasts some of the most beautiful geography. The genocide of 1994 decimated the population, killing ten percent of the population and massively changing the human landscape.

Much of the media coverage of the time focused on the urgent need for humanitarian relief in the refugee camps. Far less coverage was devoted to the lack of international intervention and the true horrors of the genocide itself.

Rwanda is not much larger than Wales. In one hundred days of genocide, one million people were slaughtered. A further three million fled their homes and crossed the border for sanctuary. The genocidaries rampaged through the population, firstly killing male Tutsis, but they swiftly moved on to killing women, children and Tutsis sympathisers. So many were killed, that even now, many of the victims lay in mass graves, never to be identified by the survivors. The democratic government instated after the end of the genocide is working incredibly hard to improve the country for its people, but it must be remembered, Rwanda is still one of the world’s poorest countries in the world’s poorest continent.

Over 60% of the population live in severe poverty. Most still have limited or no access to basic healthcare and education. Great strides have been taken to improve the lives of ordinary Rwandans but the perverse human legacy of the genocide still acts a as a barrier to development in huge areas of the country. 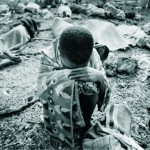 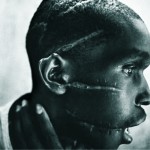 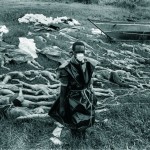 One dark night in Rwanda, a man who called himself Jean-Pierre warned the UN about a plan to exterminate Tutsis at a rate faster than the Nazis killed Jews. In a lamp lit room in Kigali, Jean-Pierre offered to lead the UN to arms caches in return for asylum for his family, but UN officials in New York refused permission. Nobody knows “Jean-Pierre’s” fate, but we do know the fate of those he tried to help.

Because three months later – in the spring of 1994 – gangs of renegade soldiers and machete-wielding street kids organised by the extremists of Hutu power set about murdering their Tutsi countrymen and leading moderate Hutus.

They killed at least 800,000 in 100 days, aided by ordinary men and women who were somehow convinced this was their “umuganda”, their work and civic duty. This was not tribal frenzy, not anarchy, but the work of an organised, hierarchical and obedient society. One that would certainly have noticed if the rest of the world had said “Stop It”…..

Read on at BBC News

To provide help to cloth, feed and pay for healthcare, including immunisation, during the childs early life.